Cindy's story: Life without joint pain is sweeter than ever 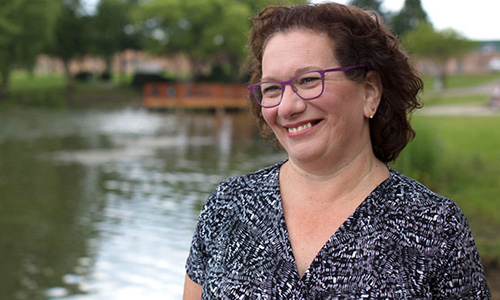 Cindy Vallera was approaching her mid-50s in good spirits and in great health-with the exception of some hip and back pain that kept her from being as active as she wanted to be. Before coming to Northwest Community Healthcare (NCH) she'd been diagnosed with arthritis in both hips, which led to pain management injections from her previous doctor.

But even injections in both hips couldn't slow the progress of her arthritis. Soon the pain in her groin became intolerable and interfered with her ability to walk without a limp. By then it was clear she was in need of a total joint replacement in both hips. She was referred to Hasham Alvi, M.D. of Barrington Orthopedic Specialists, who performs his surgeries at NCH. Once she met Dr. Alvi, Cindy knew she'd found the right surgeon to perform both of her hip replacements.

"My husband and I were very impressed with him," says Cindy. "He explained everything in detail. If we had questions, even if they seemed like minor questions, he never rushed us. He answered everything and made me feel very confident in his surgical ability and the treatment plan that he was proposing."

Joint replacement techniques have advanced significantly in the past decade. There has been a trend in performing these surgeries using minimally invasive techniques. Hip implants like the ones Cindy received are made of titanium, ceramic and a high-tech plastic called ultra-high molecular weight polyethylene.

"The anterior hip replacement procedure that Cindy had is a muscle-sparing, minimally invasive approach that preserves the muscle attachments," says Dr. Alvi. "This allows us to work in between the muscles rather than having to take them down. With anterior hip replacement procedures, patients don't have the ‘hip precautions' that are required in the traditional posterior approach."

The result: Cindy was able to bear her full weight on the leg immediately after surgery, allowing her to work with physical therapy and spend less time in the hospital. She didn't require much for pain medication, facilitating a faster rehabilitation and getting her back to an active lifestyle.

When performing the anterior hip replacement, Dr. Alvi and the surgical team use special equipment, including a unique table which allows patients to lie on their backs during surgery rather than on their sides. It also allows for the use of X-rays during surgery, which enables greater precision in the size of the implants, placement in the ideal position and a more accurate ability to make the leg lengths equal. The entire procedure takes less than 90 minutes.

Cindy underwent her first surgery on the morning of January 11, 2018. Later that same day, she was able to bear her full weight and walk on the operative leg. The pain that she had been having in her groin and the limp that she had were immediately gone after surgery. She initially used a walker but gradually transitioned to a cane and then to nothing in a matter of two weeks.

"The first time, I stayed two nights at NCH as an inpatient," says Cindy. "And for the second one, I had the hip replacement surgery on Thursday and came home Friday."

Cindy's rehabilitation regimen began in the hospital immediately after surgery and included both physical and occupational therapy. Before she was discharged, the care team provided her with a detailed rehabilitation plan to get her back to full mobility as quickly as possible.

"They explained that I would have in-home healthcare come and see me, and I would have the nurse, as well as a physical therapist visit," says Cindy. "They were very thorough."